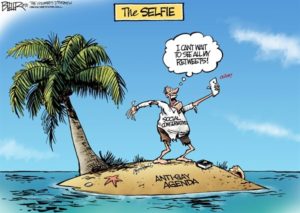 I just can’t seem to wipe the smile off my face these days. It’s not every week that sees Ted Cruz drop out of The White House race amid much controversy and embarrassing moments that might compromise him down the road (although he’s not full-blown finished like Jeb and Rubio). And it’s an even rarer week when you can follow up great national news with solid Alabama news as well. That’s right, I’m referring to the not-so-honorable Judge Roy Moore getting suspended from his makeshift Preacher’s Podium that was once known as the Alabama Supreme Court.

Longtime readers know these are my alpha and omega examples of everything that’s wrong with conservatism, the Republican Party, and American politics in general. Naturally, it’s hard not to gloat. It’s even harder not to be in a great mood.

After all, national Republicans have chosen a nominee for President that is the least socially conservative one in decades, and the party didn’t even want him. Some of the party still doesn’t want him, and we’ll see approximately 10,000 conservative think pieces bemoaning a nominee who doesn’t represent “conservative values.” The fact that Republican voters were the ones who said “give me the guy who’s been divorced twice, curses like a sailor, and formerly held all the socially liberal positions” is incredible. They decided to take a big, heaping plate of “New York Values” with their nominee.

Now sure, Trump is an unabashed racist or at the very least “racist adjacent” as he openly panders for the George Wallace vote, you know, the kind of voters Romney/Ryan merely hinted to want. [The Republican beef with Trump is less that he’s appealing to racists than that he’s so open about it, they prefer dog whistles to cat calls.] That Republicans seem to have put religion on the back-burner to embrace race shows a shifting of priorities at the very least, and perhaps an end to their love affair with social conservatism.

Then you have perhaps the best known Bigot Judge in America, Roy Moore, and now the anti-gay marriage crowd has potentially lost their most vocal judicial advocate. All of this seems to show the gay marriage fight shifting to one over transgendered public bathrooms, and usually a fight that’s focusing on smaller and smaller groups is one you’re not winning. This isn’t saying that Social Conservatism is “over,” and there will always be hold-outs, but it does seem like it’s occupying a smaller and smaller corner of our noisy political stage.

2 thoughts on “Sunday’s Sermons: Ted Cruz and Roy Moore Gone in the Same Week, is Social Conservatism in Trouble?”