Ted Cruz exited the race after losing Indiana primary by huge numbers. He needed to spend more time accidentally elbowing his wife in the face, forcing his daughter to hug him, and taunting the police with letters of his accomplishments as The Zodiac Killer. [Cruz and his family reminds me of the Trinity Killer on Dexter’s horrible Thanksgiving.]

Many think Ted lost Indiana the second he called a basketball hoop “a basketball ring.” Yep, Indiana sure has their priorities straight. Even when rejecting the worst presidential candidate of all time, it’s for the dumbest reason you could think of…how Mike Pence became Governor is starting to make more sense. 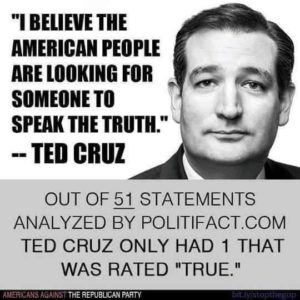 Sure, “Lyin’ Ted” isn’t a great nickname for someone running for President, but he could have a great future as a traveling bluegrass singer.

Asshole of the Week: Whoever thought it was a good idea to have Heidi Cruz actually say “my husband’s not the Zodiac Killer.” Or for Ted Cruz to say out loud “my dad wasn’t behind the Kennedy assassination.” Or for Ted Cruz to try to “diss” Trump with this all-time worst burn “Trump may be a rat, but I have no desire to copulate with him.” Ted’s withdrawal is great for America, but it’s also a shame for comedy. We truly won’t have Canadian/Zodiac Killer/Lyin’ Ted to kick around anymore.