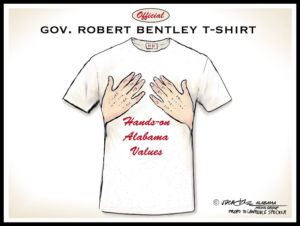 In the last couple of “A Year Long Conversation” podcasts, the themes have revolved around various hypocrisies liberals might be committing. It’s been noted that the politically correct are the new social conservatives and also that Democrats are less forgiving of sex scandals than Republicans.

And now those chickens have come home to roost for Alabama as the not-so-esteemed, (not so) uber-evangelical Governor Robert Bentley has been caught with his pants down. [Not literally, but pretty damn close to literally.] Just for the ten people out there who haven’t heard: 1. Bentley had a private phone call leaked that clearly revealed him having a sexual relationship with a woman who has not his wife. 2. In the time that recording was made and the time most people knew about it, his wife has divorced him. 3. Bentley is in a separate pot of boiling water for firing the Alabama cop who discovered the affair

Just for the ten people out there who haven’t heard: 1. Bentley had a private phone call leaked that clearly revealed him having a sexual relationship with a woman who has not his wife. 2. In the time that recording was made and the time most people knew about it, his wife has divorced him. 3. Bentley is in a separate pot of boiling water for firing the Alabama cop who discovered the affair for something totally unrelated to the affair: telling said cop to back off investigating ultra-corrupt Speaker of the Alabama House Mike Hubbard.

On the one hand, this scandal has it all: corruption, sex, a cover-up, money (the woman in question is one of the most well-paid public employees in Alabama, and Bentley has probably broke financing rules to carry on the affair), and a big, steaming pile of hypocrisy. It’s very easy to gloat about this scandal. Hell, I feel like doing it right now, you got caught fool! Go preach that in your Sunday School classes! Hahahaha, sucker! Alabama is a state that is actually hurt by being so religious (residents are finally voting on whether or not to allow a lottery while everyone else votes on marijuana or assisted suicide), and the legislature has gone out of their way to make life tough for anyone who has minority-status love like gay couples, transsexuals, or even Democrats who want to run for office without going to jail. [Just ask former Gov. Don Siegelman about that one.]

So why can’t I support impeachment? Because I literally just had a podcast saying a politician’s private life is their private life, and I would never support another John Edwards/Anthony Weiner/Elliot Spitzer-style puritanical public shaming. I even listed David Petraeus as a Republican who should not have been let go for a romantic affair. Robert Bentley’s affair isn’t what I care about at all (to me, his corruption of helping out Mike Hubbard is so much worse) but it’s also the only thing people are really talking about impeaching him for. For every one person who’s upset about the Hubbard cover-up, there are ten talking about a Governor doing the “dirty” in office and they ain’t talking about a campaign finance violation. They should, but they aren’t.

Plus, on a more pragmatic level look at who would be replacing him: Alabama Lt. Governor Kay Ivey, who most liberals feel is–if anything–worse than Bentley. And it’s revealing that most of the people actually talking about impeachment aren’t Alabama’s congressional Democrats (all 5 of them), but ultra-conservatives who feel Bentley isn’t conservative enough for their agenda. They want “moderate Rob” (which is hilarious that a guy like Bentley is considered moderate) out of the way and “Drunken Kay” basically playing absentee governor so they can have no obstacles to the craziest parts of their congressional agenda. I get the sense that if it were “goodbye Bentley” it’d be “Hello guns in the classroom, and goodbye teacher’s unions.”

There are worse things than letting Bentley finish out his last two years in office, and it just might be not letting him finish them. And yes, I’m as surprised to be typing that as you are to be reading it. What can I say? The “no good options” nature of Alabama’s one-party Republican rule makes for strange bedfellows.